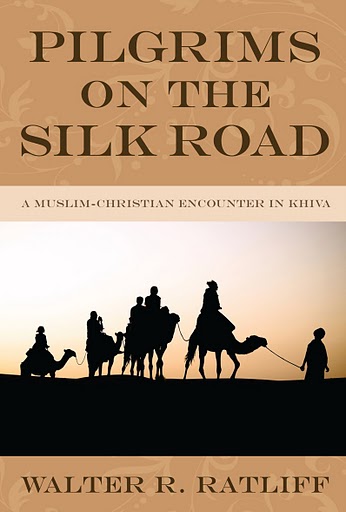 “While Ratliff’s historical presentation is a major accomplishment, the fascinating effect of his book is due largely to his storytelling skill …” –Mennonite Quarterly Review

Highlighting Ratliff’s masterful presentation…I conclude with the most outstanding attribute of the book-its irenic spirit. Ratliff’s mode of writing history and telling story is itself a remarkable feat. –Waldemar Janzen, Canadian Mennonite Univ.

Walter Ratliff’s fascinating book…urges understanding across the Muslim-Christian divide. It also asks us, as broken human beings, to practice love and tolerance for those at the fringes of culture. –Mennonite Historical Soc. of British Columbia

Pilgrims on the Silk Road fills in with rich detail the fascinating story that [Ratliff’s film] Through the Desert Goes Our Journey began. –Mennonite Weekly Review

In Pilgrims on the Silk Road, Ratliff has brought to light a fascinating but little known chapter in the history of European involvement in Central Asia, along the silk road. His portrait of the Mennonite mission to Khiva makes for great reading and an excellent companion to such classic works as Peter Hopkirk’s The Great Game. –Charles M. Stang, Harvard Divinity School

Pilgrims on the Silk Road is a captivating story. The book has planted the Mennonite presence deeply in the encounter with a multi-sided Islamic culture. I cannot think of any Mennonite group buffeted by such a series of cross-cultural experiences-from prophets of millennialism, to Russian imperialism, to the last hurrah of an Muslim Khan. I was impressed with how the Ak Metchet people had so many confrontations with violence to which they responded in a modest, nonresistant way. –Robert S. Kreider, Kansas Institute for Peace and Conflict Resolution, Emeritus

Walter Ratliff’s history of the Mennonite Great Trek to Central Asia offers a new angle of vision upon one of the most remarkable events of Mennonite history. Pilgrims on the Silk Road puts the Great Trek into the context of nineteenth-century imperial rivalry and of the Russian conquest of Khiva. The author tells tales of Muslim-Christian cooperation that resonate with meaning in our twenty-first century of religious polarization. Ratliff’s perspective is revisionist without being contentious. I hope this book will find a wide readership. –James C. Juhnke, Bethel College, Emeritus

They were seeking religious freedom and the Second Coming of Christ in Central Asia. They found themselves in the care of a Muslim king. During the 1880s, Mennonites from Russia made a treacherous journey to the Silk Road kingdom of Khiva. Both Uzbek and Mennonite history seemed to set the stage for ongoing religious and ethnic discord. Yet their story became an example of friendship and cooperation between Muslims and Christians. Pilgrims on the Silk Road challenges conventional wisdom about the trek to Central Asia and the settlement of Ak Metchet. It shows how the story, long associated with failed End Times prophecies, is being recast in light of new evidence. Pilgrims highlights the role of Ak Metchet as a refuge for those fleeing Soviet oppression, and the continuing influence of the episode more than twelve decades later.

Walter Ratliff is a journalist and religion scholar who works for the Associated Press in Washington, DC. He holds degrees from Georgetown University, Wheaton College (IL) and the University of New Mexico. He is the producer/director of the Emmy Award-winning documentary Through the Desert Goes Our Journey: The Mennonite Trek to Central Asia.