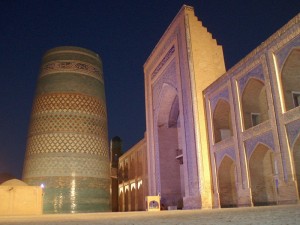 The April 2011  issue of Mennonite Quarterly Review features a lengthy (2,000+ words) review of Pilgrims on the Silk Road. I appreciate how the reviewer offers lots of praise and some thoughtful perspective for Pilgrims readers. Here are some excerpts:

The so-called Great Trek of several hundred Mennonites from the Molotschna and the Am Trakt colonies to Central Asia in the 1880s has fascinated historians and lay interpreters alike and evoked diverse interpretations. One early account by Franz Bartsch, a Trek participant, warned against committing the same errors: to interpret Scripture capriciously and arbitrarily . . . and accepting uncritically the emergence of self-appointed and self-aggrandizing leaders‛ like Claas Epp Jr. In Pilgrims on the Silk Road, Walter R. Ratliff presents, in contrast, a colorful and sympathetic narration. Ratliff is filmmaker (whose credits include a documentary of the Great Trek, Through the Desert Goes Our Journey), historian, journalist and consummate story teller. He is also a great-grandson of Trek participants.
…
As a historian, Ratliff surveys a wide panorama. Apart from a brief vignette of his early childhood (xiv,

2f.), we do not meet Claas Epp Jr., traditionally seen as the chief inspirer of the exotic Trek, until page 76. Instead, we are introduced broadly to the political and military moves of the British Empire and the Russian Tsarist Empire to extend their control over the Muslim states between their realms, among them Afghanistan, Turkestan, Bukhara, and Khiva, the last of these subdued by Russia (but not annexed) only seven years before the arrival of the Mennonite Trek. Ratliff’s presentation of the Muslim side in the political context of the Trek should be new and enlightening for Mennonite readers, who have generally read the Trek story in isolation, or, at best, in the context of Russian Tsarist politics.

Ratliff also offers much valuable insight into the internal pre-Trek Mennonite dynamics—dynamics strongly influenced by German Pietist millenarianism and the European political unrest around the turbulent year 1848—that eventually led them to seek a place of refuge in the East. He highlights the multiple leadership personalities and views, thus in effect greatly relativising the significance and leadership of Claas Epp Jr. and his excessive end-time claims and delusions.
…
While Ratliff’s historical presentation is a major accomplishment, the fascinating effect of his book is due largely to his storytelling skill in presenting the characters and scenes, whether they were Russian, British, Muslim or Mennonite; officials, soldiers, Turkoman tribesmen or the colorfully diverse inhabitants of multicultural cities like Orenburg, Tashkent, Samarkand and Khiva. The Trek participants themselves come to life as they move along in their horse-drawn covered wagons over dusty steppes, on long camel caravans through sandy deserts, or on boats along treacherous rivers. They experience wagon breakdowns, illness, childbirth, enemy attacks, robberies, and many, many deaths. But the reader also partakes of beautiful scenery, lush vegetation and dazzling architecture, as well as much faith, deliverance, kindness and hospitality.

For the details, Ratliff has frequent recourse to vivid autobiographical records, as for example, the observations of Elizabeth Unruh Schulz, who kept a diary from the time her family joined the Trek in 1880, when she was 14 years of age. Her autobiography, although written later and poorly translated into English, is unsurpassed for human interest, detail, vividness and unencumbered youthful perspective. Ratliff effectively introduces her as a six-year-old girl, and then returns to her intermittently.
…
After highlighting Ratliff’s masterful presentation and attaching a modest caution for the Mennonite community, I conclude with what I consider the most outstanding attribute of the book under review: its irenic spirit. Ratliff’s mode of writing history and telling story is itself a remarkable feat. In his book there are neither villains nor saints: only human beings. Not that wisdom and folly, good and evil, are lost in a valueless ethical relativism, but neither is anyone vilified, not even Claas Epp. I appreciate it especially that the author, although reticent in sharing his personal beliefs, takes religious convictions seriously in their own right, without any condescending attempt to “explain” them from the vantage point of sociology, psychology or some other extraneous perspective.