The Time Zones Are A-Changin’ 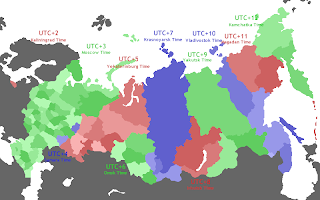 In America, you change the time. In Mother Russia, time changes you!

Enjoy that clock rollback Sunday morning. In Russia some lawmakers are losing sleep over the country’s eleven time zones. (The continental United States has a measly four time zones). They want to consolidate some of the zones to make their intranational workday a little less unwieldy. Here an article from the Moscow Times.

Gennady Lazarev of the Vladivostok State Economics and Service University, said the change would promote economic ties between Moscow and the Far East. “Our working day ends when it starts in Moscow. It’s both inconvenient for us and Moscow,” he said in a statement published on his university’s web site. Lazarev also said the time difference created many inconveniences for businessmen and politicians who travel often between Moscow and the Far East.

China solved it the easy way. The massive country has a single time zone for the entire 3,000 mile stretch from east to west. They discarded their five time zones in 1949. They dispensed with daylight saving time in 1991.