(May 27, 2007) 7:55am – I got up at about three hours ago to walk around the city gathering video of Kiev at sunrise. It’s unseasonably hot (35°C/95°F). However, the city is clean, the people are relaxed – even the protesters at this point. The facilities are modern, but the hotel rooms lack a/c, and the elevators don’t run after a certain hour at night.

Apparently, many of the hotel employees live in the common areas after finishing work for the day. A few raised their heads from lobby couches as my shoes clip-clopped and my camera gear jangled down the stairs before dawn.

Protesters were camping in large green tents in the town square and in the park around the Parliament building. The political crisis here was escalating toward violence the night before – even involving the military – but it was suddenly resolved during talks in the early morning hours. 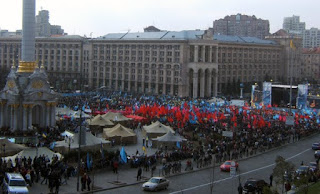 We are beginning the first full day of the tour today. During a long layover, we did introductions in the Munich airport and sang some of the hymns from the 1880’s Great Trek. I had some great conversations about the original journey with Jim Juhnke, (the leader of the tour), Duane Friesen, Walter Friesen and others while we waited for our flight. We discussed Claas Epp Jr.’s real role in the Trek, etc.