On William Shakepeare’s 450th birthday, it’s worth taking stock of the depth of the Bard’s writing that has sustained his work through the centuries. Hamlet in particular emerges as a perennial favorite and perhaps the most popular of his plays. Themes about the mystery of death and uncertainty about our own actions in the world still speak to audiences today.

Shakespeare’s plays often have very strong religious elements that help drive the stories forward. Hamlet’s plot in particular is colored by the awareness of sin among certain major characters in the play. Why is the ghost of Hamlet’s father so tortured? Why does Hamlet hesitate when he has a chance to kill his uncle/step-father and avenge his father? Shakespeare assigns very specific religious reasons for each of these crucial points in the play – but these religious reasons reflect very different ideas about God, repentance and salvation.  Even though there are Roman Catholic features found in the play’s theological devices, a person’s role in their own salvation represents a stream of Arminianism that Shakespeare adapted for the sake of Hamlet’s plot. 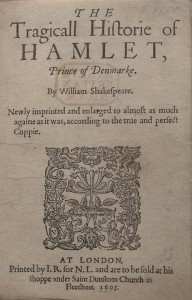 What is Arminianism? Jacob Arminius (d. 1609) was Dutch Reformed theologian who did a majority of his theological writing at the same time Shakespeare (d. 1616) wrote Hamlet and other plays. Arminius argued against established Calvinist dogma that God predestined the salvation for a limited, “elect,” group of people, and that human will and free action can contribute nothing to one’s eternal status. Arminius asserted that everyone has the choice to accept the salvific grace of God, and that a person can use their own free will to assent to Christ’s forgiveness of their sins: “The sum of the Gospel is this, ‘Repent and believe the Gospel,’ or ‘believe in Jesus Christ, the Son of God, and your sins shall be remitted unto you, and ye shall receive the gift of the Holy Ghost, and afterwards, eternal life.”[1] In other words, election (and conversely, condemnation) is dependent on the decided faith of an individual. Also, believers can jeopardize their own salvation by resisting faith in Christ’s atonement at a point later in life. An extension of this theological argument claims that those who are true believers, and therefore the saved, cannot fall into mortal sin. Therefore, those who have committed mortal sin(s) and have yet to repent are in danger of losing their place in heaven. [2] In this construction, sin has a direct relationship, and can be seen as a form or outward manifestation of belief.

The full doctrine of what is known today as “Arminianism” was developed after Arminius’s death. However, his ideas countering Calvin’s doctrine of the “elect,” and the individual’s role in their own salvation were a hot topic in England during his lifetime. Not only did the Church of England adhere to Calvinist dogma, but theological debates like these were part of the common discourse among people far outside the clergy. For example, in The Life of Richard Hooker, Izaak Walton wrote: “Here [in England] the very Women and Shopkeepers, were able to judge of Predestination, and to determine what Laws were fit to be made concerning Church-government; and then, what were fit to be obeyed or abolished … Men of the slightest Learning, and the most ignorant of the Common people, were mad for a new, or Super- or Re-reformation of Religion.”[3] 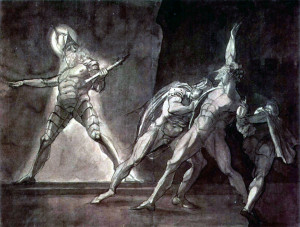 The Ghost of Hamlet’s Father by Henry Fuseli

The Archbishop of Canterbury fought against Arminianism, as well as the misuse and misunderstanding of Calvinist theology. As one can imagine, the nuances of highly structured theological systems were often lost on non-specialists. Political parties also attempted to co-opt theological ideas to advance agendas with little direct relation to accepted Church doctrine. [4]

As the ghost of Hamlet’s father describes how he was killed, he provides a telling detail that drives the prince into a more profound anger. Not only was his father murdered by his uncle, but he was sent to the afterlife without being absolved of his sins:

Ghost: Of life, of crown, of queen, at once dispatch’d: Cut off even in the blossoms of my sin, Unhousel’d, disappointed, unanel’d, No reckoning made, but sent to my account with all my imperfections on my head.

The ghost’s purgatorial doom “to walk the night” and “fast in fires” is another strong Roman Catholic theological reference. In Protestant Elizabethan England, such clear affirmations of Catholic doctrine could be seen a variety of ways. For example, it could be a reflection of Shakespeare’s possible Catholic beliefs – a bit of theological subversion against the state Church snuck into the story to make it more stimulating. Or, it could be a nod the historic Catholicism of Denmark at in the Middle Ages.

References to Roman Catholic sacraments disappear with the king’s ghost. However, the theme of salvation and condemnation remain important character motivators. During key turning points in the play, a form of Arminianism takes center stage as the characters wrestle with repentance and forgiveness. One moment is in Act III, Scene III, as King Claudius is struggling with his guilt over the murder of his brother. Claudius’s monologue is packed with ideas (as is typical in Hamlet). He is recognizing his sin and its fallout, ruminating on how absolution requires a full account of the offense, and wondering how forgiveness can come while he still enjoys the ill-gotten fruits of such a horrible act of fratricide:

What if this cursed hand were thicker than itself with brother’s blood, Is there not rain enough in the sweet heavens to wash it white as snow? Whereto serves mercy but to confront the visage of offence? And what’s in prayer but this two-fold force, to be forestalled ere we come to fall, Or pardon’d being down? Then I’ll look up; my fault is past. But, O, what form of prayer can serve my turn? ‘Forgive me my foul murder’? That cannot be; since I am still possess’d Of those effects for which I did the murder, my crown, mine own ambition and my queen. May one be pardon’d and retain the offence?”

After his monologue, Claudius kneels in prayer. Hamlet, spying on Claudius, recognizes the king is now vulnerable to attack. However, he defers killing him because Claudius would at this point die absolved of his sins:

Now might I do it pat, now he is praying; And now I’ll do’t. And so he goes to heaven; And so am I revenged. That would be scann’d: A villain kills my father; and for that, I, his sole son, do this same villain send to heaven. O, this is hire and salary, not revenge. He took my father grossly, full of bread; with all his crimes broad blown, as flush as May; And how his audit stands who knows save heaven? But in our circumstance and course of thought, ‘Tis heavy with him: and am I then revenged, To take him in the purging of his soul, When he is fit and season’d for his passage?

Hamlet resolves to kill Claudius at a time when he will die in his sins, and therefore suffer a punishment in the afterlife – notably an eternal “hell” rather than his father’s temporary purgatorial wandering.

When he is drunk asleep, or in his rage, or in the incestuous pleasure of his bed; At gaming, swearing, or about some act that has no relish of salvation in’t; Then trip him, that his heels may kick at heaven, and that his soul may be as damn’d and black as hell, whereto it goes. 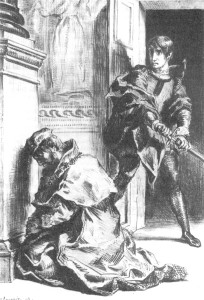 Hamlet comes upon the king at prayer by Eugène Delacroix

Both Claudius and Hamlet in this scene seem to be working from a common Arminian understanding of salvation. That is, salvation is achieved through personal repentance from sin and reaffirmed belief. Arminius defines this idea as the “remedy of repentance.”[7] In contrast to the elder Hamlet’s complaint that he did not receive the proper Catholic sacraments, no services involving a priest were needed for Hamlet to conclude that Claudius was suited at this moment for a heavenly reward.

There are other occasions in the play where repentance and forgiveness have a similar function in advancing the storyline. For example, in the final scene when Laertes and Hamlet are both about to die, Laertes tells Hamlet that Claudius is to blame for poisoning the queen, as well as the overall conspiracy that is about to lead to their own deaths:

Here, Hamlet once again expresses the Arminian idea that repentance (or the lack thereof) before death has a direct bearing on whether a person goes into the afterlife in a state of justification. Yet, for Hamlet a prayer of repentance is not needed here, only tacit forgiveness between friends and the exclamation “Heaven make the free of it!”

Over the course of the play, Shakespeare seems to have modified basic ideas of Arminian theology as a tool to heighten the drama and propel the plot of Hamlet. As seen in the works of Izaak Walton, theological discourse about the nature of salvation was common in Elizabethan England.[8] Arminius’s writings were widely circulated and debated during Shakespeare’s life. [9] Arminian ideas about salvation and repentance were present in both the mind of the playwright and his audience. Even so, Arminius might take issue with the dismissal of grave sins with only a prayer of repentance, or a simple exclamation. He might say that this is an oversimplified view of his theology, to the point of inaccuracy. Arminius asserted that true believers undergo a process of sanctification that takes away the propensity to commit mortal sins like those found in Hamlet: “It may be stated, here, from the general definition of permission, that revelation, motion, or suasion have so much efficacy, that if they are used and applied, the sin would not, in fact be committed.”[10]

[6] For a side-by-side comparison of the various versions of Hamlet, see: http://www.thewoostergroup.org/projects/hamlet/Q1Q2F.html

[9] Herbert Darling Foster, “Liberal Calvinism; The Remonstrants at the Synod of Dort in 1618.”