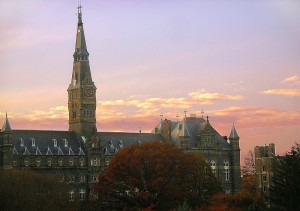 Working in journalism is one of the best ways to see all sides of the human condition. Over the years, I have reported from conflict zones and cow pastures, spoken to famous and infamous world leaders, interviewed both victims of violent crime as well as criminals, hung with the VIPs and seen extreme poverty.  Among these experiences, I’ve found there is something to be learned in both the ivory tower and as well as the poison ivy.

You might be familiar with the characterization of news as the “first rough draft of history.” The late Washington Post owner/publisher Phil Graham possibly did the most to popularize the term. Here are some additional thoughts from Graham that flesh out the idea:

“The strengths [of the press] arise from the power to communicate information and ideas for which the public is hungry — and to do this with an independence which our Constitution provides. Our weaknesses arise very largely out of our deadlines, our rush and bustle — out of the very fact that we are a daily press and not a group of contemplative scholars free to ruminate at leisure.

The inescapable hurry of the press inevitably means a certain degree of superficiality. It is neither within our power nor our province to be ultimately profound. We write 365 days a year the first rough draft of history, and that is a very great task.

… Being entrusted with a great responsibility and being also in a great hurry, we ought always to have our guards up against being too much influenced by the quick and angry winds that blow [shades of Ephesians 4:14 - wr]. We ought, even in our daily hurry, to keep in mind that the life of any day has some essential connection with days and months and years that have gone before and with others that will follow.”
(Philip L. Graham, ”Public Administration and the Press,”  Public Administration Review , Vol. 13, No. 2 (Spring, 1953), pp. 87-88)

It’s those connections to to past days and years, and to the deeper context surrounding one of today’s important issues, that I am being afforded a chance to research at Georgetown University. That is, I will be studying a particular intersection of religion and international affairs: how American Christian groups handle the twin issues of international religious freedom and engagement abroad. (Something tells me I won’t be “ruminating at leisure.”) It is a topic that I have developed a strong connection to during the last decade or so.

A very smart person once said “Liking research is liking DOING it, not liking about where it might put you, or liking to view yourself as someone who does it.” You certainly don’t need a doctorate to do journalism, or even teach. However, I have discovered both an aptitude and enjoyment in the more serious academic work I have been doing the past several years. The fact that my research interests mesh well with my vocation is a bonus.

Here is a rundown on my area of research. The narrative that Christians are a persecuted people is a perennial hot topic embedded within the global issue of religious freedom for all faiths. Today, large evangelical non-governmental organizations, such as World Vision, have a big footprint in developing countries. They are also influential players in Washington as well.  In 1998, World Vision and a cross-section of other advocacy organizations successfully pushed Congress to pass the International Religious Freedom Act. Their work resulted in the formation of a bi-partisan commission (USCIRF) devoted to religious freedom, an ambassador-at-large, and an annual report from the State Department that outlines the status of religious freedom in “countries of particular concern.” The first ambassador-at-large for international religious freedom was the former president of World Vision, Robert Seiple.

But the  issue of religious freedom did not emerge fully formed in the late 90′s, and it isn’t the exclusive domain of evangelicals. It has a long history. For centuries, many Anabaptists held the classic 16th century persecution accounts found in Martyr’s Mirror alongside the Bible when forming their worldviews. Today, modern Mennonite thinkers are pursuing a nuanced view of what these stories mean for their community. Arguably, the Roman Catholic commitment to religious liberty in the Second Vatican Council’s Dignitatis Humanae declaration helped energize waves of democratization in Catholic-majority countries during the 20th century.

Themes of religious freedom an interfaith engagement have emerged time and again in my work as a journalist. They are strong threads in my book and documentary about the Mennonite trek to Central Asia. They also are important elements of my project on Muslim-Christian violence in Nigeria. Back in 1998, I also reported on the International Religious Freedom Act’s movement through Congress in Christianity Today.

The study of how various Christian groups form their opinions and influence religious freedom and engagement issues is a deep subject. Obviously, for my dissertation, my research is destined to be trimmed down to a very specific question. I hope that the effect of my research in this area will help others develop informed decisions about this topic. My previous research at Georgetown focused on evangelical responses to Islam and Muslims after the Sept. 11th attacks. You can read the book based on an updated version of my thesis here: Christians and Muslims at the Epicenter: How the Sept. 11th Attacks Shook and Transformed American Evangelicalism. I am sure my graduate communications study at Wheaton College will come in handy as well.

Georgetown’s DLS doctoral program is deeply interdisciplinary. There are few places in the country that offer the world-class resources that Georgetown has with regard to both religious studies and international affairs. I also consider myself lucky, given the very low-acceptance rate among those applying to the program. My particular avenue of study will draw on history, theology, rhetoric and international affairs.

Where will this all lead? Perhaps more teaching opportunities – the classes I have been teaching so far at the University of Maryland University College have been very rewarding. Overall, the students are terrific. Perhaps it will also lead to more opportunities to tell important stories with a degree of depth. I certainly hope so.

Personification of Rhetoric – Cathedral of Notre-Dame of Laon, 1865