Check out this review of my book in a research journal produced by the think tank Uluslararası Stratejik Arastirmalar Kurumu (International Strategic Research Organisation/USAK) in Turkey. It’s good to see the exposure Pilgrims on the Silk Road is receiving: 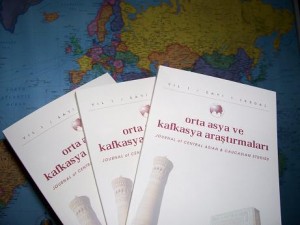 Pilgrims on the Silk Road attempts to re-narrate the story of a band of Russian Mennonites who went on an adventurous journey from their settlements in Ukraine to what is today’s Uzbekistan in the 1880s in order to free themselves off the militaristic and centralistic tendencies of the Tsarist Russia and fulfill the apocalyptical predictions of the leader of their community. It is an interpretation of a long and arduous expedition into “terra incognita” in the eyes of descendants of the original “pilgrims”. What rendered the time-honoured lands of Central Asian Muslims unknown to the Mennonites was that they had no long1lasting encounter with Muslims previously, and that this close-knit group of Mennonites, hopeful but not without doubts, followed their leader Claas Epp Jr. to those distant lands with the belief that they would establish an “earthly kingdom” in accordance with the principles of Christ.

Mennonites are a group of Dutch people most of whom are farmers who follow the teachings of Frisian Menno Simmons (149611561). They are considered to be a branch of the wider Christian denomination which is called Anabaptists. Their most distinctive features, apart from their unwavering belief in pacifism and anti1militarianism, are their reclusion from state and government in any form and their apocalyptical convictions. Due these reasons, they have been prosecuted, since their inception, not only by Catholic Church but also by Protestants and state authorities at territories of whom Mennonites lived.

State and religious persecution forced Mennonites to migrate from one country to another seeking refuge, as long as their new host promised them right to self-governance and exemption from military service. Therefore, throughout history, Mennonites moved from Netherlands into many countries including Germany, Russia, USA, Canada, Paraguay, Mexico and Brazil. Today, there are 1.5 million Mennonites worldwide, about one fifth of whom live in USA. Mennonite groups have always been known for their aversion of militarism and violence.
The history of Russian Mennonites dates back to the 18th century when, under the threat of conscription and increasing centralistic pressures at the expense of Mennonite self-governance, Mennonites of Germany decided to move to Russia in response to Catherine the Great’s promise for religious freedom, military exemption and right to self1governance. The Tsaritsa was eager to host such a people for she wanted to make use of the Mennonites’ aptitude for modern agricultural techniques as Mennonites were known for their talent and skill in agriculture and craftsmenship.

Peaceful as they were, the Russian Empress planned to plant Mennonites in newly acquired lands in order to encourage Russian farmers to adopt and use new and more efficient agricultural techniques. Thus came into existence the Russian Mennonites. The first encounter between Mennonites of Russia and Muslims took place in the steppes of Ukraine where, the Nogais, destined for Caucasia, were selling their lands to the newcoming Russians and Mennonites. While trivial attacks took place against Mennonites, they quickly demonstrated to their Muslim neighbors their peacefulness and their skill in agriculture and medicine.

Nevertheless, the more lasting encounter between Mennonites and Muslims, which constitutes the subject of Pilgrims on the Silk Road, took place in Central Asia. However, before delving into the long journey of Mennonites, their incentives to undertake such a risky travel should be examined. With the coming to power of Alexander II, the Russification policies gained momentum. While religious freedom Mennonites enjoyed for decades remained untouched, their traditional ways of education in German language was challenged. The looming threat of conscription, coupled with Russification, forced Mennonites to seek a new refuge. While many turned their eyes to the Americas where land abounded and religious freedom was under guarantee of the state, a group of farmers under the leadership of Claas Epp Jr. sought to emigrate to the east, to Central Asia instead. Epp and his followers believed that the Second Coming of Christ would occur in the “Land of the Rising Sun”.

Their gathering1place for the Tribulation, they believed, would be the Emirate of Bukhara. The gruelsome journey of Mennonites began in what is today’s Ukraine and ended in modern day Uzbekistan. Many deaths due to the hard conditions were met with patience, and the community sought to liken their situation to that of the Jews roaming in the desert as told in Bible. While the Bride Community, as Epp called alluding to Bible, harboured people with conflicting views about Epp’s leadership and vision about Central Asia, there was no schism that divided people. In the final analysis, all members of the community were willing to move to Central Asia; some were less eager though. That the community was unable to settle for a long time and had to roam from place to place was due to the untimely death of their patron, the commander of Russian army in Central Asia. While Kaufmann had promised them exemption from military service, his successor was not sympathetic for Mennonite cause.

Therefore, Mennonites had to cross the border that divided the Russian Empire and the Khanate of Khiva and settle in Ak Metchet, leaving the Emirate of Bukhara behind, thus annulling the prophecy that the place for gathering for the Tribulation would be Bukhara. While the village of Ak Metchet met the expectations of the community in many ways, it was no safe haven. Turkmens living nearby who were slaughtered by the Russian Army just a decade ago considered these Western-looking foreigners as enemies, and hit them whenever they could. Mennonite pacifism was tested in the form murder of a community member by Turkmen raiders, but deep-rooted pacifism won.

Mennonites were able to secure their place in Khiva through their service to the Khan as well as the rest of the local populace as skilled craftsmen and through some members’ knowledge of foreign languages. Thus, while the community made some money to improve their financial situation, they became protected against local Turkmen raiders without further violent attacks. It was also this time that Mennonites started to struck more cordial friendship with the neighbouring Muslim community. Mennonites taught them new techniques in cotton farming, and became the first to introduce certain technological advancements to Khiva. Today, when one delves into the history of photography in modern day Uzbekistan, the first names they encounter belong to those of Mennonites.

The hardships of living in Ak Metchet coupled with the growing schism among members of the community regarding Claas Epp’s teachings and his style of leadership. While Epp harbored many signs of an authoritarian leader even before the community took its leave from their former lands in Ukraine, the apocalyptical nature of his teachings and claims became ever more erratic and daring, to the point that he claimed he was the son of god, surpassing his earlier claim that he was one of the Two Witnesses. This caused a rift among the community members that could not be breached; therefore the community experienced strained years of division. Many members who could not take Epp’s claims and leadership that brought them to the distant and hostile lands anymore started to emigrate to Americas where Mennonite settlers raised funds to facilitate their co-religionists’ emigrations. Therefore, the number of Mennonites living in Ak-Metchet dwindled in time.

The Communist Revolution was, in a sense, the last draw for many Mennonites. While they were initially granted privilege to self-governance, education and exemption form military service, the state soon started to increase its pressure on this community at the expense of the privileges they secured earlier. After Stalin came to power, collectivisation and anti-religious policies forced Mennonites in Russia and Ukraine emigrate to whichever countries they could manage to get themselves. Mennonites of Central Asia, and of Ak Metchet in particular, felt the crushing pressure of state with a lag of time, due to lack of consolidated Communist power in Central Asia. However, as the Communist regime consolidated its authority even in the remotest corners of the Soviet Republic, Ak Metchet too hardly escaped it.

While Mennonites refused joining kolkhozes [Soviet collectives-WR] and submitting to the authority of the Communist Party, to its social and religious policies in particular, they continued their policy of pacifism, to no avail. These pressures, therefore, instigated a new wave of emigration as far as the regime allowed. In they years of the Great Purges, Mennonites living in Central Asia, including those in Ak Metchet, were transferred to Tadjikistan where they were forced to join collective farms. However, their number was reduced to mere a few thousands.

The epilogue of the book tells how a group of American Mennonites, descendants of those who settled in Ak Metchet but later emigrated to the USA, visited the village in to commemorate the 50 year1long Mennonite presence in Ak Metchet. Their encounter with the descendants of the former neighbors of their grand-parents is a touching as well as teaching one. They came to realize, to their great surprise and mire, that while Mennonites were not living in Ak Metchet anymore since their forceful removal by the Communist regime, they were still remembered and held in high esteem by the local Uzbeks. These American visitors have witnessed that Mennonites of Ak Metchet were even included in the prayers of these Muslim people. This constitutes a mind-broadening experience both for Mennonites and Muslims in an atmosphere of ever escalating religious tensions between Muslims and Christians throughout the world.

The visit also opened new venues for Mennonite historianship, for American Mennonites usually viewed the story of the Bride Community as that of a disaster due to chiefly false prophecy of Claas Epp Jr. And his authoritarian whims. However, the new visitors came to see that Mennonite presence in Ak Metchet brought about good relations between Mennonites and Muslims, and that the community itself was willing to follow Epp to Central Asia. His authoritarian style was nowhere like that of modern day dictators; and although his teachings fell out of favor among many members of his community, people still elected to remain in Ak Metchet.
–