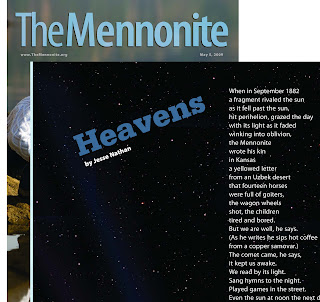 Congratulations to Jesse Nathan, the co-producer of Through the Desert Goes Our Journey, for taking top honors this year from the Associated Church Press for his poem, “Heavens.” The winning poem appeared in the May 5, 2009 issue of The Mennonite.  It’s written as a first-hand reflection by one of those experiencing the hardship on the migration to Central Asia, as depicted in Through the Desert. Central to the poem is the arrival of the Great Comet of 1882 during their journey.

“Award of Excellence: The Mennonite for ‘Heavens’ by Jesse Nathan, May 5. A finely drawn poem that connects different worlds through its image. It is effectively subtle and in control of its imagery; its voice is genuine.”

Here is the winning poem:

When in September 1882
a fragment rivaled the sun
as it fell past the sun,
hit perihelion, grazed the day
with its light as it faded
winking into oblivion,
the Mennonite
wrote his kin
in Kansas
a yellowed letter
from an Uzbek desert
that fourteen horses
were full of goiters,
the wagon wheels
shot, the children
tired and bored.
But we are well, he says.
(As he writes he sips hot coffee
from a copper samovar.)
The comet came, he says,
it kept us awake.
We read by its light.
Sang hymns to the night.
Played games in the street.
Even the sun at noon the next day
did not diminish the moment much.
Tell Ma it was a momentous event,
us wandering madly, hands aloft
to shield, to see that vein of star,
to track its track, its bleed
of white across the sky.
Tell Ma the red cow
calved an hour ago.
It’s a black bull.
A trophy for the market.
And though an axle broke on the road,
though there’s no good rope
around to drag the wagon out,
though sheets of sand swept up,
though Jantzen’s boy caught a thumb
in a wheel—clipped it clean—
though climate typhus takes its toll
we know we’ll find a place to pray.
We’ll pray we recognize the signs
that slice and score the sky.
We’ll pray for tomatoes, fat potatoes,
for brittle whispering fields of wheat.
We’ll pray for spring, water, tougher feet.
We’ll pray we’re steady as the sun
until our sudden one
bright quiet comet comes.

Jesse Nathan is an associate editor at McSweeney’s in Berkeley, Calif.