“Through the Desert Goes Our Journey” Wins an Emmy 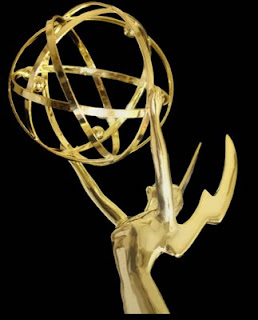 NORTH NEWTON – The contribution of Bethel College musicians to a documentary on the Russian Mennonite “Great Trek” to Central Asia in the late 19th century has resulted in a regional Emmy® award.

“Through the desert goes our journey,” the title song for the 2008 documentary co-produced by Walter Ratliff of Herndon, Va., and 2005 Bethel graduate Jesse Nathan of San Francisco, took the award for “Musical Composition/Arrangement” at the Heartland Chapter Emmy® award ceremonies held July 18 in Denver and Oklahoma City.

In Through the Desert Goes Our Journey, the Bethel College Concert Choir sings the hymn. Andy Gingerich, a 2005 Bethel graduate from Albuquerque, also plays the tune on guitar. Named in the award, in addition to Ratliff, Gingerich and Concert Choir director and Bethel Professor of Music William Eash, is 2008 Bethel graduate Dan Graber of Sioux Falls, S.D., who arranged the music for both choir and solo guitar.

When the song was first nominated in early June, Ratliff wrote in his blog for Pilgrims on the Silk Road, his recently published book about the Great Trek: “What makes the hymn ‘Through the desert’ special is that, just like elements of the Great Trek story are now being rediscovered, so too was the lost music for this song presented again for the first time in over a century.”

Ratliff continued, “The hymn became an anthem (and perhaps an earworm) of the Great Trek Mennonites as their wagon trains rumbled over the Central Asian steppes. Herman Jantzen recalls singing ‘Through the desert goes our journey’ as they rode through cool nights in the wilderness to escape the desert heat, the sky illuminated by the Great Comet of 1882. The lyrics are recorded in numerous first-person accounts of the journey. However, the music to this hymn seemed lost to history.”

While the tune will sound familiar to Mennonites who know the hymn “Heart with loving heart united,” found in both the Mennonite Hymnal (1969) and the more recent Hymnal: A Worship Book, Ratliff’s research for the documentary, with the help of Helen Ruth Jantzen Unruh and historian James Juhnke, Bethel professor emeritus of history, uncovered the original tune at #388 in the Gesangbuch in Mennoniten Gemeinden fuer Kirche und Haus (1901 and 1922).

“When Walter approached me [about using this hymn for the documentary],” Eash says, “I said, ‘That sounds like a great idea – I have a student I can put on it.’ So I handed it over to Dan, who did the musical notation and arranging, rehearsed the choir and did the recording here in our on-campus studio, with my direction.” The audio file then went to Agile Arts Productions of Herndon for final production.

“This piece was very much a student-driven project,” Eash adds, “and a great example of liberal arts collaboration – a professional film director, Bethel alumni, emeriti history faculty, choir members from a wide variety of disciplines, and recording technology staff.”

“The music is one of the best features of the documentary,” Ratliff says.

Samples of the Bethel College Concert Choir and Gingerich’s guitar renditions of “Through the desert goes our journey,” with scenes from the documentary, are at www.youtube.com/watch?v=1LhcWqrIvNo.

Through the Desert Goes Our Journey had its world premiere at Bethel’s Fall Festival in October 2008 and its broadcast premiere April 2, 2009, on KPTS-Channel 8, the public television station in Hutchinson.
The Emmys® are the annual awards of the National Academy of Television Arts and Sciences (NATAS). The Heartland Chapter, one of 19 regional chapters of the NATAS, was formed in 1986 and serves the television industry in these markets: Denver; Oklahoma City; Tulsa; Wichita/Hutchinson, Omaha, Colorado Springs/Pueblo; Lincoln/Hastings-Kearney, Neb.; Topeka; Grand Junction/Montrose, Colo.; Cheyenne, Wyo./Scottsbluff, Neb.; and North Platte, Neb.

Bethel College is a four-year liberal arts college affiliated with Mennonite Church USA. Bethel is known for its academic excellence and was the only Kansas private college to be ranked in Forbes.com’s listing of “America’s Best Colleges” for 2009 and one of only two Kansas colleges profiled in Colleges of Distinction 2009-10. For more information, see the Bethel Web site at www.bethelks.edu.