The Last Mennonite in Molotschna

(May 30, 2007) 11:00am – On Tuesday we visited the Molotschna villages southeast of Zaporozhe. The Mennonite colonies here covered a couple of hundred of square miles with dozens of villages. A majority of the participants had grandparents and great-grandparents that came from here.

We stopped the home of an 88-year-old woman who had grown up as a Mennonite in Molotschna. Margarethe Platt was a young married woman when she witnessed the events of WWII that drove the last of the Mennonites from the region. I was able to gather video of her in her home, as well as a scene 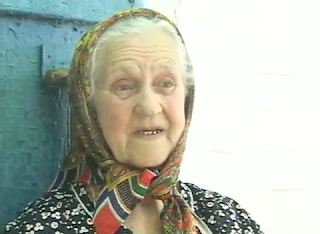 where the group sang a traditional Mennonite hymn to her in German. Margarethe survived her four sons and her husband, and now lives alone in one of the old Molotschna villages. She said having us come to her home was like having relatives come for a visit.

We also did a (short) wagon ride. There were two hay wagons driven by gnarly looking horses and drivers. Before the (very touristy) looking participants climbed aboard the wagons, Walt Friesen re-enacted the sermon by the leader of the group that left Waldheim, Molotschna from that very spot in 1881 on the Great Trek. He did a really good job.

We ate lunch on Tuesday at a Mennonite center that conducts humanitarian work in Molotschna. The center was founded some years after cruises began taking descendants of the Mennonite settlers through the area in the 1980’s. The center does medical work in the communties, as well as work with senior citizens, etc. The center sprang from a growing sentiment among the Mennonite descendants who visited here that there should be some positive, lasting presence in Molotschna beyond tour buses and granite monuments. In Ukraine, much of the memory of the German-Mennonite settlements in Molotschna was suppressed by the Soviets after World War II. In addition to the Mennonite center, one of the old Mennonite churches, in Petershagen, has been restored and re-opened.

**2009 Note: I found the following in the Molostchna Historical Atlas by Helmut Huebert:

“There are a few remaining Mennonites in [the village of] Hierschau. Andre and Margarethe (nee Plett) Krevetz also escaped on the “Great Trek” [to Germany during WWII] in 1943. When they were recaptured after the war, Andre was imprisoned for five years for having been drafted into the German army. Upon release, they were able to return to Hierschau and worked for the Gorki Collective Farm. 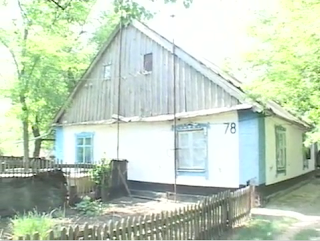 In 2000, they were retired, living in their modest home at the west end of the village, north end of the street. Their address is number 78, Vladovka Village. Margaretha is the grand-daughter of Gerhard Plett [a prominent minister in Molotschna during the 1920’s]. She and her husband had four sons, two of which unfortunately died as a result of the Chernobyl atomic disaster.”

*Images from the documentary “Through the Desert Goes Our Journey“