News from the Nowhere Farm

When it comes to tight writing, it helps to be a poet/songwriter.

Linford Detweiler from Over the Rhine is the master when it comes to family letters. He does a great job of evoking scenes without being overwrought. Here is his latest: 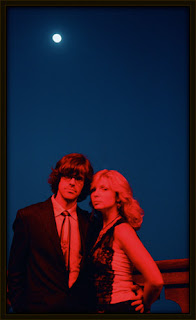 It’s October in Ohio. Our little piece of slow curving earth is changing right in front of our eyes everyday. Color is slipping into the faces of the trees. The nights are chilly. I slip on a wool sweater and a cap now when I walk the after dark paths.

The orchards are selling their new apples. I picked up a bag of jonathans recently – an excellent eating apple for late afternoons. A lot of folks have been talking about the honey crisps. I look for an apple not too sweet that pops and snaps when you sink your teeth into it and break off a bite.

Karin and I celebrated our wedding anniversary yesterday – a clear, crisp fall day much like the day that found us 13 years ago in Eden Park in Cincinnati surrounded by family and friends.

It’s good to be in love.

And we’re just back from Canada. Our niece Maria was married on Saturday, the first Detweiler grandchild to tie the knot.

She and her husband wrote part of their own vows and what struck me was how they promised each other that they would do everything they could to help the other meet their full potential. It was as if they believed the other had the raw materials to be truly great, and they each were owning a responsibility, a duty to help their partner get there, even if they didn’t fully understand yet what that looked like.

I don’t think I had ever quite heard this at a wedding ceremony. Maybe it’s something the younger generation gets. I like it.

When we arrived back at the farm, we were sad to hear that the father of Kenny Hutson (the multi-instrumentalist that’s been touring with us for a good while) passed away Sunday evening. We think of all the late night stories that Kenny has told us about growing up hunting and fishing in Georgia and playing bluegrass with his father. Apparently when Kenny’s Dad was at a music festival years ago getting ready to walk on stage, Bill Monroe leaned in and gave him the following instructions:

Y’all just rare back
And let it go
Like you ain’t got
A care in the world.

Our thoughts are with Kenny and his family.

We are at the stage of life where we are watching the young begin their fresh chapters, as our parents and their friends begin now one by one to speak their last few lines and step off stage.

Living out here on our little farm in Southern Ohio for almost five years now, we feel the deep rhythm of the seasons like never before. The full moon rises in a different place every month as it circles the house. Different wild flowers bloom at different times – the asters being one of the very last of summer to splash their colors around the farm. The hummingbirds vanish before the first hint of frost. The September sky opens up, the clouds get bigger and whiter. It all begins to feel familiar as it cycles over and over.

I ran across this from my journal earlier this year:

“Now it feels like Spring is nosing around. The maple trees have their red buds. The finches have hints of gold seeping into their soft bodies. The yard is greening. The weatherman says 70 degrees today. Hooray.

Some overachieving midwestern robin is already well on her way to every robin’s dream: building the world’s most sturdy nest. She arranges her grasses, stuffs her family’s mattress.

Twenty years ago this month, without knowing what we were doing, we began making tentative new recordings in a basement garage. All we had was a dream and more heartache than we knew what to do with. We have left behind a trail of deeply flawed recordings, hopefully as deeply flawed as our own humanity/hearts, and in that sense, honest. We wanted the music to make us look better than we actually were. I suppose we succeeded somewhat, but mostly failed to pull the wool over the eyes of the world.

There is a lot of aspiration in the music. We wrote what we longed for. We wrote a lot with our eyes closed (more about the world inside than the world outside?). We aim
ed impossibly high and prayed that when we fell inevitably short, it would still somehow be good.

What excites me more than the first twenty years is the next twenty. A yet-to-be-written-book. It feels like spring.

Someone said, In your twenties and thirties you learn. In your forties and fifties you earn.

Hopefully, I’m less torn up inwardly now. Less conflicted. (Some might argue this is a liability for a writer. I don’t think so.)

It’ll be good to see how it all shakes out. New terrain. Choose your cliché.”

Yes, the next 20 years. It’s no longer springtime and yet we know seasons bursting with creativity will come round again in their time. It’s gray and wet outside today but new songs are starting to land. We have a few finished that are beginning to point the way forward for the many songs that are unfinished. We’ll see where it goes. We hope you can come along. We hope you sink your teeth into the not too sweet songs and feel the pop and snap as you
break off a bite.

And we know this: when the nights begin to get colder, we come looking for you.

It’s October. If we squint our eyes we can see all the way to the end of the year.

Hope to see you,