The World Monuments Fund recently released their list of endangered places for 2010. Among them are the Ancient Desert Castles of Khorezm, the medieval name of Khiva when the kingdom was at its height. The ruins date from the golden age of the Islamic empire.

UNESCO has a breakdown of each site, and why they are significant. The descriptions make these castles sound like something out of Narnia: 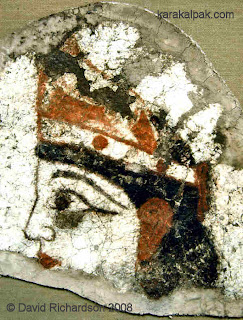 TOPRAK QALA – The most valuable is “Hall of Kings” – a dynastic sanctuary in which on an altar burned fire before big images of 23 Kings of Khorezm. They settled down on sufas (benches). Besides, there was “Hall of Victories” with images on the walls, in the form of the bas-reliefs sitting kings and soaring near them of goddesses. There was a hall and “Black soldiers” with images of kings and the black soldiers offering glory to the kings. “The hall of deer” was decorated with figures of these animals. The hall of “Dancing masks” partially has preserved on walls of the image in pairs men and women. Ancient written documents about Khorezm have been found in this temple section of the palace.