Wheaton, the alumni magazine for Wheaton College, recently posted an article about its former students working in the field of journalism. Wheaton is an evangelical liberal arts college and graduate school in the suburbs of Chicago. I completed a master’s degree there just before I began my news career. The article delves into how faith and the values reinforced at Wheaton play a role in how the college’s alumni approach their jobs in major media outlets. It’s very good! 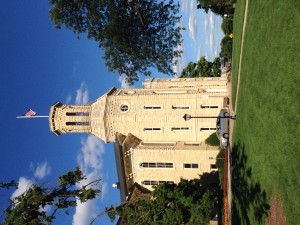 Here is the full article, “Truth-Telling and Inquiry: How Wheaton alumni are paving the way toward responsible journalism in a polarized society,” by Bethany Peterson, Wheaton Magazine, Winter 2021

Below is the full Q&A I provided for the article:

How did you become interested in journalism? How did you get to the position you’re in today?

My interest in journalism was sparked as a young man because it is one of the best ways to see all sides of the human condition. Over the years, I have reported from conflict zones and cow pastures, spoken to famous and infamous world leaders, interviewed both victims of violent crime as well as criminals, spent time with VIPs and seen extreme poverty. My broadcasting career began in Christian radio in Albuquerque, NM. I worked as a disk jockey for a Christian music station, and later as an operations manager for a station connected to the Calvary Chapel association of churches. After college I got my first full time reporting job at a local ABC News affiliate. The education and global experience I received through Wheaton was instrumental in my move from local reporter to working with international journalists based in Washington, DC. After working as a photographer and editor with reporters from Germany, Spain, Israel and other countries, I began my role at the Associated Press.

Why were you drawn to working at a wire service specifically?

There are certain attributes of a place like AP that I find professionally attractive. First, the company has a stellar reputation for accuracy and integrity in fact-based reporting. The news product that AP produces is reliable. It simultaneously has accomplished both a global and local reach. We have reporters in all 50 states, and a network of bureaus around the world filled with journalists who know the people and issues where they live. This provides an unmatched ability to produce quality journalism. These factors all contribute to the fact that every day, AP’s news content reaches more than half of the world’s population. My colleagues are true professionals and good people to work with. In all, it’s a great place to be from a professional standpoint.

When/how did you become interested in documentary work? How is that similar to and/or different from your other work as a journalist?

In contrast to a short news package, a documentary film offers a chance to dig deeper into the context of a subject. The fundamentals of fair and accurate representation are the same. At the same time, the task of daily journalism is to continually and hurriedly produce “the first rough draft of history.” The documentary format offers a chance to settle down and explore a subject. It is also important to know that film and video are emotional media. It can be difficult (but not impossible!) to effectively create an emotional connection with a viewer in a short package. In contrast, a longer form project allows the viewer time to get to know the people in the story, and to stretch out shots that allow for a more immersive experience.

How did you become interested in global religious movements and Muslim-Christian relations? Why report on these topics specifically? Why religion reporting?

I have had a twin interest in religion and journalism since my undergraduate days. As an undergraduate, I majored in both Religious Studies and Journalism. There are a few touchpoints that refined my professional interests. The first was my reporting for Christianity Today on the passage of the 1998 International Religious Freedom Act. This introduced me to the topic, and its importance in free societies. The second was a trip I took to Nigeria a few years later to work on a documentary project about Muslim-Christian conflict. All these years later we can see these are perennial concerns. For me, there is an endless well of interest in how faith communities are working out their relationship to other religious communities and to the state. Major world events over the past two decades seem to be the catalyst for these dynamic relationships. I explore these themes in my book, Between Faith and Power: Religious Freedom as Dynamic Engagement (Wipf & Stock, 2020).

How do you balance covering other religions as well as your own?

John 8 provides a good context for an answer to this question. In this chapter, Jesus and the Pharisees have a discussion about truth. The chapter discusses not only the truth of the woman accused of adultery, but also of the sins of those who accused her. Jesus continues in the chapter to discuss the nature of getting at the truth, and the implications that flow from knowing the truth. He speaks about how the “truth will set you free.” Jesus was interested in conveying certain truths regarding his identity and what it means to follow him. Of course, metaphysical truths are outside the bounds of most reporting. But getting at the truth of a story, regardless of party, religious group, or individual, is essential. At the end of the day, providing honest and accurate reporting is what everyone should expect of journalists today, regardless of their faith, or no faith. Conversely, everyone regardless of their beliefs or political outlook, should expect fair and accurate coverage, and an appropriate professional distance between journalists and the groups they cover.

How did your Wheaton education shape you as a journalist?

There were certain hallmarks of the Wheaton experience that helped shape me as an individual and as a journalist. First, my graduate communications program put me in close contact with a community of other journalists and communication professionals from around the world that were serious about both their faith and their profession. My program included a chance to study in England and the Netherlands, which came in handy later as I worked with European journalists reporting from Washington, DC. The world-class faculty also played a strong role in providing models for how to think critically about how we encounter the world and our professional lives in a way that will benefit society.

What kind of values guide your everyday reporting?

The values that guide me as a journalist are tied squarely to the AP’s news values and principles. They align closely with the values taught at Wheaton that inform my professional life. That is, being an effective journalist requires the highest standards of integrity and ethical behavior. This includes reporting a story with accuracy and fairness, and without being swayed by any person or action. If someone is being portrayed in a negative light, we need to make a real effort to hear and report their response. Transparency in reporting is also important. Attribution, accuracy and fairness are the guiding lights that should help journalists navigate their role in society.