An Eye-Opening Trek Into Turkish Society 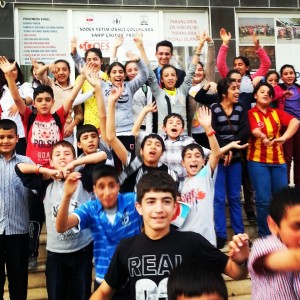 In Gaziantep, Turkey, the children at a local orphanage were recently asked to write about what they wished for most in life. The exercise was designed to help them think about their goals for the future. However, one child took the answer in a different direction: “I wish my parents could come back for just two hours, so I could show them around and have them meet my friends.”

This anecdote formed perhaps the most poignant moment in our recent visit to Turkey. As an orphanage sponsor told our group the story, our host and translator, Emre Celik, had to take a few moments before he passed the story along to us. There were few dry eyes in the room. Earlier, the children had greeted us with cheers, laughter and singing. But this story brought home the stark realities that these children face every day.

The facility we visited serves about 600 children between the ages of 10 and 18. Most of the children are Kurdish. Before coming to the orphanage, they were in danger of becoming street children, or being recruited by violent rebel groups such as the Kurdish Workers’ Party (PKK). Here, they can continue their education, make friends, and receive counseling. The site we visited is part of a network of orphanages taking care of about 10,000 children in Turkey who have lost one or both parents. 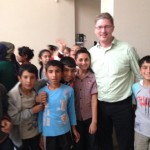 The counselors work hard to engage new children coming to the facility. They also watch for danger signs. The biggest concern among the staff is that a new children will emotionally withdraw into themselves. Developing a habit of withdrawal after an emotional trauma can have long term negative consequences. The staff and other children work hard to give the new kids a sense of care and belonging. This is as important to their health as any educational program the school has to offer. Caring, reciprocal relationships matter. Like a recent Harvard study (unsurprisingly) concluded: Happiness is love. Full Stop.

The orphanage visit was part of a week-long study fellowship for DC-area Ph.D. students. The trip gave us an inside look into many key segments of Turkish government and society. Our visits ranged from Turkey’s foreign affairs brokers in Ankara, to the country’s leading newspaper in Istanbul, to businesses, relief organizations and think tanks located around the country.

Many of the organizations we visited were part of what its popularly called the Gülen Movement. Its members refer to it as Hizmet, which simply means “the service.” It is perhaps the most powerful civil society group in Turkey. The founder, Fethullah Gülen, is a Muslim public intellectual and cleric who advocates what The Economist described as “pacifist, modern-minded Islam, often praised as a contrast to more extreme Salafism.” Hizmet members shun political office in favor civil society projects. They run large universities, hugely popular media outlets and influential non-governmental organizations. They remind me of Christian groups that have established universities, hospitals, NGOs and civil society organizations throughout the history of the United States. Faith is an important starting point for each member of the Hizmet. At the same time, Gülen advocates a secular government where religious practice is free from state control, and the government holds every religion at an equal distance. He promotes religious freedom for all faiths who wish to participate in the public sphere. 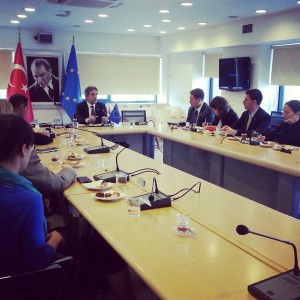 This places the Hizmet ideology far apart from some Islamist groups who wish for a theocratic state, as well as the Turkey’s historic Kemalist government position, which simultaneously controls religious institutions and removes them from public life. This includes the displacement of religious participation in education and other key sectors of civil society. Gülen promotes religious pluralism, freedom of conscience and fully engaged faith communities as critical components of a healthy society. Civil society is left vulnerable without support from citizens who actively look after its welfare. Just as caring relationships can change the life of an orphan, engagement by service-oriented religious groups can change a nation.

Yet, the trip was more about contemporary Turkey than it was about the Hizmet. Some meetings were disconnected from the movement’s activities, and some included critics of the movement. Each encounter helped us form a picture of Turkish civil life, including some universal concerns. From an editor at Zaman, Turkey’s largest daily newspaper, we learned how both sources and journalists face intimidation from the government, which severely hampers the role of the press in a free society. The morning after we met Zaman’s editors, I received word that the U.S. Justice Department seized AP’s phone records (likely including my own) from our DC, NY and Connecticut offices.

One of the biggest highlights of the trip was getting to know the other participants. It was a “fellowship” in the true sense of the word. We were all scholars with a different research interests studying at a variety of schools. Yet, there was a great deal of mutual respect running through the widely (and sometimes wildly) different personalities. We were able to discuss many points of view in our conversations with each other and the people we met along the journey. We also formed friendships that I hope will last into the years ahead. 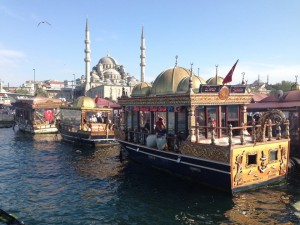