This review appeared in the June issue of The Mennonite Historian. The reviewer is Ahmet Şeyhun, Professor of Islamic/Middle Eastern History at the University of Winnipeg. I consider it a great compliment that he gives his stamp of approval to the Islamic and Muslim historical context that I attempted to portray in Pilgrims on the Silk Road. 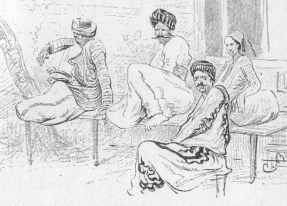 In the review, Seyhoun mentions my reference to an important Ottoman thinker named Ali Suavi. The inclusion of Shariah (the Islamic moral code and religious law) in modern nation-building was a controversial issue in the days of the Suavi and the Khiva Mennonites. In aftermath of the Arab Spring, it continues to be an important issue today.

The Mennonites of Khiva would have argued with Suavi’s assessment that good government begins with Islamic law. However, they were certainly affected by Shariah, along with the often violent winds of change as Khiva moved from a kingdom, to a quasi-democratic state, to a vassal of Soviet Empire.

Walter R. Ratliff, Pilgrims on the Silk Road : a Muslim-Christian encounter in Khiva (Eugene, OR : Wipf & Stock,
2010), 293 p.
Reviewed by Ahmet Şeyhun, Professor of Islamic/Middle Eastern History, University of Winnipeg.
In his book Ratliff colorfully portrays the life in Khiva during the Russian conquest. His vivid account tells the story of the conquest with numerous secondary episodes, which describe the web of relationships between native Central Asian Muslims, Mennonites and Russians, and it is a very original book in its genre.
As a historian of the Ottoman Empire specialized in the intellectual history of the late Ottoman period, I was delighted to learn that the ideas of Ali Suavi, an important young Ottoman thinker, were discussed among the Mennonites in Khiva.

Throughout the nineteenth century, Tsarist Russia was on the rise and from 1865 onwards Russian hegemony was gradually established over the Turkic and Muslim states of Central Asia, namely the khanates of Khiva, Bukhara and Kokand. Russian conquest of the Trans Caspian Turkmen lands between 1881 and 1884 would bring Russia to the gates of India in northern Afghanistan. The Russian-British rivalry in Asia was called the Great Game and it constituted one of the most important episodes of imperialism.

Walter R. Ratliff has written a very interesting work describing one of the epic journeys of the Mennonites, this time in Russia and Central Asia of the nineteenth and early twentieth centuries. Central Asia, always a crossroad of civilizations and cultures, is the setting of this Mennonite odyssey. Events unfolding in this book occurred during one of the most important times in the modern history of Central Asia – its occupation by Russia.

Ali Suavi is well known for his fiery articles published in Europe and the Ottoman Empire, denounced despotism and autocratic rule, and advocated democratic ideas. What is  less known is that he also wrote a book on Khiva.
According to Suavi, a true democratic regime emanating from the principles of Islam and Sharia is the  perfect guarantee for protecting human rights. Suavi is also considered a precursor of pan-Turkism since in his book on Khiva he called Khivans “Central Asian Turks”. Overall, Walter Ratliff’s book is a very successful attempt to demonstrate how the peaceful and industrious Mennonites established, while remaining true Christians, a mutual understanding with Muslims and built exemplary relationships with them.