Check out my “Art in the First Person” article in the latest issue of Elan, an arts magazine in Northern Virginia:

An Author in Search of a Story: Retracing a Long-Forgotten Trek
by Walter Ratliff

A few flakes of white paint clinging to the rusting, sun-shaped ironwork of the gate fell away as I pushed it open. I was entering the site of the old Mennonite village of Ak Metchet near the ancient Silk Road city of Khiva. It was the culmination of a long trek that took me from the wheat fields of Kansas, to the steppes of Ukraine, and finally this windswept corner of Uzbekistan. Yet, in some ways the journey had just begun. Most journalists dream of finding a story that has the richness and universality that make it worthy of a book or documentary.

By the time I took on the film Through the Desert Goes Our Journey and the companion book, Pilgrims on the Silk Road, I had done several projects that were substantial to one degree or another. However, I still searched for a story that would warrant a deeper treatment. As it turned out, it was waiting within my own family history all along. In 1881, my great-

grandparents joined hundreds of other Mennonites living in South Russia on a migration to Central Asia. From the time of the Protestant Reformation, Mennonites had moved from country to country searching for a place where they could remain free of military service and govern their own affairs.

Since the 1500s, many moved east from the Netherlands to German lands, and eventually to the Russian Empire. When it looked like Russia would be the latest country to rescind their exemption from military service, tens of thousands

migrated to the United States in the late 1800s.

However, a small group felt their new refuge was further east. They also believed the Second Coming of Christ was imminent, at their haven from the coming Tribulation lay beyond Russia’s eastern frontier. There were many deaths along the way to the refuge they dreamed about. The graves of children and adults dotted their path into Turkestan. My ancestors and many others soon abandoned hopes of finding a mythical refuge in the deserts of Muslim Central Asia, and migrated to the American Midwest.

Hardships and theological errors of the trek cast a stigma on the journey to Central Asia among many American Mennonites. Our family had a few scraps of a diary about the eastward journey, describing the hardships and exotic place-names. However, the account did not say why they moved east so soon before going west to the United States. Our family was not alone; a sense of shame about the trek was carried among some descendants’ families for decades. Even in my parents’ generation, the story remained

largely hidden. Yet by my generation the dam of silence was about to burst among those who thought it was a fascinating episode that needed to be reassessed.

In 2007, I joined a team of scholars and descendants to retrace the steps of the migration from Ukraine to Uzbekistan. What we found upturned many of our basic assumptions about the story. As we walked toward the site of the old Mennonite village in Khiva, a mottled grey statue of a young man stood sentry along the path—only his bended knee remained on the pedestal. His pale stone torso, sporting a jaunty kerchief, lay fallen at the monument’s base. Someone chipped away the face long ago.

Several weed-covered yards away, a grey concrete building sported a fading mural of uniformed boys and girls offering eternal smiles around an ever- burning campfire. The statue, mural and building were the remnants of a Soviet youth camp that supplanted the 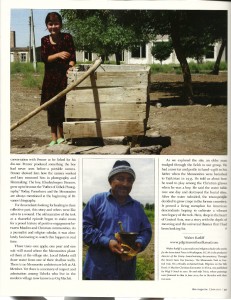 Mennonite village after the community was sent into exile in 1935. Our old view of the migration seemed just as damaged, blighted and static. What we learned from our Uzbek hosts cast a much more sympathetic picture of the Mennonite community in Khiva.

We learned how the Mennonites built lasting friendships with their Muslim neighbors. We also learned of their modernizing impact. Uzbeks do not remember anything about failed prophecies. To them, the Mennonites were modernizers, farmers, entrepreneurs, and valuable neighbors. One story, unknown among Americans but at the forefront of Uzbek understanding, hit us like a revelation. The story goes that Wilhelm Penner, a Mennonite schoolteacher in Ak Metchet, used to tie a lamp to his fishing pole. For this, the locals called him Panorbuva, or “grandfather lantern.”

One day, an Uzbek boy struck up a conversation with Penner as he fished for his dinner. Penner produced something the boy had never seen before – a portable camera. Penner showed him how the camera worked, and later mentored him in photography and filmmaking. The boy, Khudaybergen Divanov, grew up to become the “Father of Uzbek Photography.” Today, Panorbuva and the Mennonites are always mentioned at the beginning of Divanov’s biography. For descendants looking for healing in their collective past, this story and others were a like salve to a wound.

The old narrative of the trek as a shameful episode began to make room for a proud history of positive engagement between Muslim and Christian communities. As a journalist and religion scholar, it was absolutely fascinating to watch this happen in real time. An apple, a pear and an oak tree still stand where the Mennonites planted them at the village site. Local Uzbeks still draw water from one of their shallow wells. There is no Mennonite architecture left at Ak Metchet. Yet there is a memory of respect and admiration among Uzbeks who live in the modern village of Oq Machit.

As we explored the site, an older man trudged through the fields to our group. He had a mortar and pestle in hand—a gift to his father when the Mennonites were banished to Tajikistan in 1935. He told us about how he used to play among the Christian graves when he was a boy. He said the water table rose one day and destroyed the burial sites. After the water subsided, the townspeople decided to grow crops in the former cemetery. It proved a living metaphor for American descendants hoping to cultivate a vibrant new legacy of the trek to Central Asia. Here, deep in the heart of Central Asia was a story with the depth of meaning and the universal themes that I was looking for.

–Walter Ratliff is a journalist and religion scholar who works for the Associated Press in Washington, DC. He is the producer/director of the Emmy Award-winning documentary Through the Desert Goes Our Journey: The Mennonite Trek to Central Asia. He is also the author of the critically acclaimed book, Pilgrims on the Silk Road: A Muslim-Christian Encounter in Khiva. He lives in the Herndon, VA historic district with his wife Tricia, an oil painter (élan-June 2010) and his two sons.