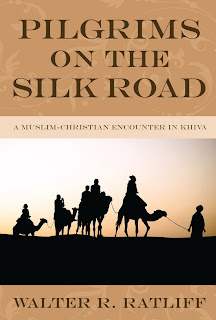 On my desk is Pilgrims on the Silk Road: A Christian-Muslim Encounter in Khiva by Walter R. Ratliff, published by Wipf and Stock, 2010, 293 pages, $34.
I had little exposure to Mennonite history until I went to Goshen (Ind.) College. Looking back on my studies there, and a decade later at Associated Mennonite Biblical Seminary, I see a solid foundation in the 16th-century Anabaptists, a decent grounding in “Old Mennonite”/Mennonite Church history in North America, and not much from the Russian/ Prussian/General Conference Mennonite Church section.
My vague impression of the 19th-century apocalyptic movement that took Russian Mennonites to Central Asia — a journey most often associated with Claas Epp Jr. — was of a misguided bunch blindly following a charismatic leader into the unknown.
This began to change in 2007, when Bethel College professor emeritus of history James Juhnke and then-assistant professor of business Sharon Eicher led Epp descendants and others on a “retrace of the Great Trek” from the locations of the Molotschna colony in Ukraine and Am Trakt colony in Russia to a spot near Khiva, Uzbekistan, that was for almost 50 years the Mennonite village of Ak Metchet.
Walter Ratliff, a content manager for Associated Press Television with an interest in Christian-Muslim relations and with Mennonite Brethren and Great Trek connections in his extended family, joined the tour. He was already exploring largely unknown aspects of the Great Trek, with the view of writing a book.

That book is Pilgrims on the Silk Road. It was preceded by a 2008 documentary film co-produced by Jesse Nathan, Through the Desert Goes Our Journey

What the experience of those who took the Great Trek retrace reveals, and what both Through the Desert and Pilgrims confirm, is that the story of Claas Epp, the eastward Mennonite migration and the people who made it is far more complex than Mennonite popular history outlines.

While Epp remains an enigma, Pilgrims on the Silk Road puts the motivation of the families leaving their prosperous and established Russian colonies to venture into the desert into a solid historical context.

It becomes clear, first of all, through Ratliff’s description of leaders such as J.K. Penner, Emil Riesen and Herman Jantzen, that these were educated, well-read people, far from a homogeneous bunch who took everything Epp said without question.

But perhaps even more important is the depiction of the respect and cooperation between Muslim and Mennonite communities. The Muslim village of Serabulak allowed several Mennonite families — forced out of a settlement in the khanate of Bukhara — to spend the winter there and even to use the mosque for their Sunday services.

When the Mennonites finally found a “permanent” home at Ak Metchet (until the Stalinist government collectivization in the mid-1930s), they coexisted peacefully for the most part with their Muslim neighbors. The Uzbek descendants of those neighbors who live and farm near the village site today remember nothing of millennial prophecies or strange theologies but only a thriving community of skilled craftsmen and expert farmers, friendly people devoted to peace.

An epilogue speaks of a healing of memory, of sorts, for Great Trek descendants from the United States who grew up with a sense of shame about “fanatics” in their ancestry.

Ratliff quotes Juhnke: “Our study and observations before, during and after the tour convinced us that the traditional narrative of the Great Trek is misleading in some key respects. I came to realize that I had not been doing a very good job of teaching this topic in Mennonite history classes at Bethel College over the past quarter century. Ironically, the village of Ak Metchet, scorned as it often was by other Mennonites, today is remembered and celebrated in Khiva more enthusiastically than larger settlements elsewhere.”

Pilgrims on the Silk Road fills in with rich detail the fascinating story that Through the Desert Goes Our Journey began.

Melanie Zuercher is the writer and editor for institutional communications at Bethel College in North Newton, Kan.