Here’s a recent promotional letter. Thanks everyone for the great response! 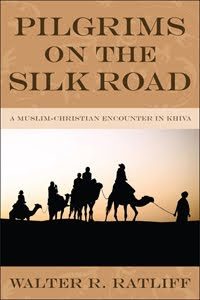 I want to let you know about my new book from Wipf and Stock Publishers called Pilgrims on the Silk Road: A Muslim-Christian Encounter in Khiva.

Pilgrims is a nonfiction adventure about a group of Mennonites who made the Great Trek to Central Asia in the 1880s. They were searching religious freedom, and believed the Second Coming of Christ would occur soon in “the land of the rising sun.” After recovering from the shock of failed prophecies, many remained in the Muslim kingdom of Khiva. Over the decades, the Mennonites of Ak Metchet formed a prime example of peaceful cooperation and coexistence between two very different religious communities.
In addition to breaking new ground on the Great Trek and the community of Ak Metchet, Pilgrims on the Silk Road contains more than 50 rare photos and maps. It also features a translated epic poem illuminating the history of the Mennonite colony in Khiva. This poem, unknown to previous historians, was written shortly before the community was destroyed by the Soviet secret police.

The publisher’s retail price is $34.00. However, I am offering the book for $26.00 through this web site. Click the button on the left to order a signed copy with this special discount. It’s also available at Amazon.com and other online bookstores.