The Secret History of December 25th

(Adoration of the Magi – Fourth century Sarcophagus)
Around this time of year, questions about the exact date of Jesus’s birth pop up in sermons and over dinner tables everywhere. The most common explanation I hear is that Jesus was likely born in the spring. Among other things, that’s when the shepherds would be keeping watch over their flocks by night – especially newborn lambs vulnerable to predators. The argument goes that, hundreds of years later, Christians moved the celebration of Jesus’s birth to correspond with the pagan winter solstice festival. It appears that this is not quite right. 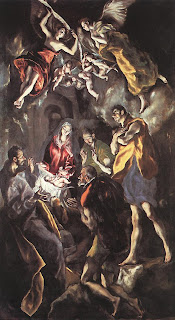 A new article in Biblical Archeology Review challenges this explanation. The author says the date of the nativity as we know it today was adopted much earlier than the period when repurposing pagan festivals was a popular pastime for the Church.

The author places the adoption of the December 25th date of the nativity within a couple of centuries after the Resurrection. He argues that early Christian theologians, steeped in Jewish theology and symbolism (and actively rejecting pagan influence), apparently chose the date for its peculiar connection to Easter.

Early Christian theologians found a beautiful symmetry in the idea that Christ was crucified on the same calendar day that he was conceived (14 Nisan in the Jewish lunar calendar). Add nine months to the passover/crucifixion date for that year, and voila, you have the December 25 calendar date of Christ’s birth. This theological symmetry reflected a deep understanding of rabbinic theology and symbolism, rather than an effort to hitch a ride on a popular pagan festival.
The author comes from a liturgical background, and other websites run by Catholic and Episcopal scholars make similar arguments for a Christian vs. a pagan origin for the date of Christ’s birth.
Check out the BAR article by Andrew MacGowan here. 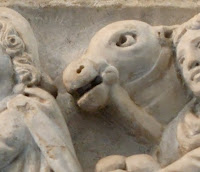 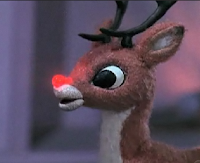 By the way . . . Doesn’t the middle camel in that fourth century nativity scene bear a striking resemblance to Rudolph?