This endorsement really captures an important focus of the book:

“Pilgrims on the Silk Road is a captivating story. The book has planted the Mennonite presence deeply in the encounter with a multi-sided Islamic culture. I cannot think of any Mennonite group that has been buffeted by such a series of cross-cultural experiences—from the intrusion of coercively certain prophets of millennialism, to the cross-fire of British-Russian imperialism, to raiding nomadic tribesmen, to the last hurrah of an Islamic Khan, to a crumbling Czarist empire to a Communist takeover. I was impressed how the Ak Metchet people had so many confrontations with violence to which they almost invariably responded in a traditional, modest, nonresistant way. Under all that militantly millennial talk was a core of residual Anabaptism. Pilgrims offers numerous good examples of nonresistant responses to violence.”

Below is a picture of Robert Kreider and others signing an agreement to create a museum to the Mennonites in the old city of Khiva. Click here to learn more about the museum project related to the story found in Pilgrims on the Silk Road. 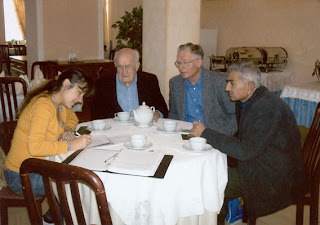 Caption from Kauffman Museum’s web site:
Retracing the “Great Trek” into Central Asia by Mennonites in 1880-1881 has evolved into an international museum collaboration. On November 9, 2007, Dr. James C. Juhnke and Dr. Robert Kreider, representatives of Kauffman Museum, North Newton, Kansas, signed a cooperative agreement with Dr. Azat Karimov, Chief Keeper of the Funds for the Ichan Kala Museum in the city of Khiva, Uzbekistan.
Here are more photos associated with the museum project: 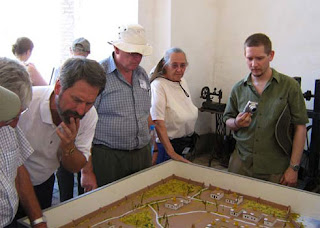 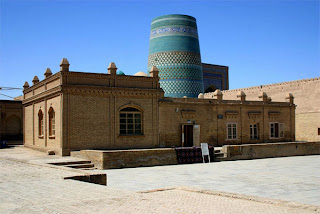 The museum will be located in the former Trade Building in the old walled city. Mennonite entrepreneurs sold Singer sewing machines in that building in the 1920s. The exhibition will include Mennonite-made tools, woodworking equipment and household items as well as maps, period photographs, and a model of their settlement.