The Sea That Disappeared 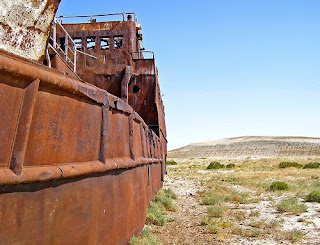 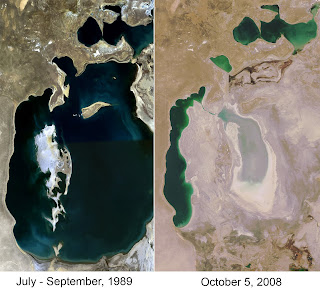 Massive hulks of ships lie rusting in the desert sun more than a hundred miles from any water. Harbor towns that were once hubs of commerce crumble into the landscape. Sandstorms choke the air with toxic dust. Its a scene that only Mad Max could love. 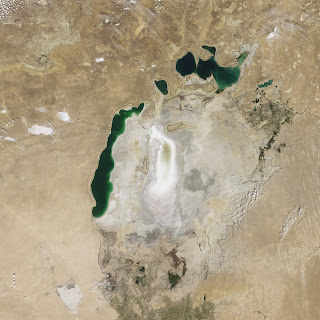 The Aral Sea was once the fourth largest inland body of water. For the past five decades, it has been steadily shrinking. In recent years, it split into three smaller lakes. Satellite images from August 2009 show how the largest of its three segments has disappeared entirely.
(August 2009 satellite photo) 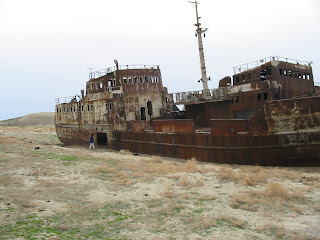 The Mennonites in Pilgrims on the Silk Road passed by the northern shore of the Aral Sea on the Great Trek, and settled upstream in the lush delta region south of the sea. They described the settlement of Lausan as tangled with a rich variety of vegetation and filled with wildlife. It’s a different story 125 years later.

The sea began its steady disappearance when most of the water was redirected by the Soviet government to irrigate cotton crops. As the sea retreated from its ancient shores, an ecological disaster advanced on the 3.5 million people who lived around the sea.

Duststorms originating in the dry seabed blow pesticides like DDT into the air. These pesticides and other toxins once flowed into the sea from the surrounding farmland. Today, Karakalpaks and other ethnic groups suffer an extremely high rate of birth defects from exposure to the poisonous chemicals. The population also suffers from dramatic rates of cancer and other diseases. 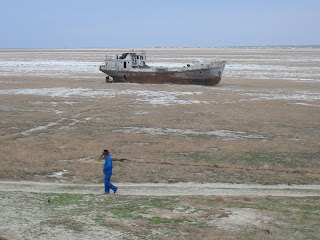 The nation of Kazakhstan, with help from the World Bank, has built a dam to increase the flow into what is now known as the North Aral Sea. The flow of water immediately doubled, and the Kazakh government hopes to begin restocking the North Aral with freshwater fish. The North Aral covers only a fraction of the old sea, but it might provide a model for other countries that are suffering from the Aral’s disappearance.
Photos from Wikimedia Commons