Christianity on the Silk Road

Hundreds of years before the Mennonites trekked into Central Asia, a group of Christians known as Nestorians lived along what is known today as the Silk Road.

In a few weeks, Dr. Charles Stang of Harvard University is presenting a talk about the Nestorian Stele. The large stone tablet documents some of the earliest evidence of this Christian movement in the region. The tablet, erected in A.D. 781 in western China, commemorates a seventh-century mission of Nestorian Christians who brought what the monument calls jingjiao, “the luminous religion.”

Mark your calendars for November 17 at 5:15pm for the talk at Harvard’s Center for the Study of World Religions. It takes place in the CSWR Common Room, 42 Francis Avenue, Cambridge, Massachusetts. 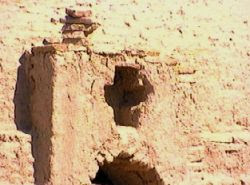 Today, evidence of this ancient Christian community can still be seen in archeological sites along the Silk Road. One of them is in Khojayli, Uzbekistan – not far from the former Mennonite settlement of Lausan. Crosses there adorn ancient burial sites connected to this group. Al Beruni, one of the great Muslim scholars of the Middle Ages, called the Nestorians the “most civilized” of the Christian groups living in the Caliphate.

Images are from the Khiva.info web site. Read more about the Nestorians in their article on the community.