View Larger Map
(June 3, 2007) Today we made the journey from Samarkand to Bukhara, with one very important stop along the way. About two hours into our bus ride, we took a detour to see the village of Serabulak. This is a town where the original Great Trekkers wintered after they were dramatically evicted from their settlement by Bukharan authorities. 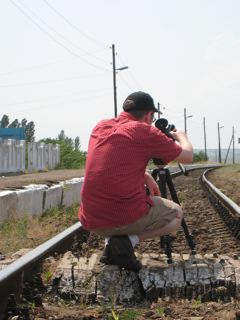 The village was a bordertown between Imperial Russia and Emirate of Bukhara. In 1882, the trekkers had attempted to settle a few miles south of the village, but were kicked out of the settlement by Bukharan authorities. The Mennonites were caught in an awkward position of having forsaken their Russian citizenship, and forbidden to go beyond the empire’s border.

The people of Serabulak opened their homes to the 153 Mennonites to stay until they received word that they could migrate to Khiva. The Kyk-Ota (Blue Grandfather) mosque in Serabulak was used as a church by the Mennonites, and three Mennonite marriages occurred there. With help from some of the locals, we found that very mosque. 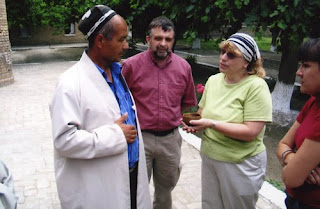 I was able to gather some good video for the documentary, including a nice interaction between the Uzbeks and the members of our tour. There was one moment when Charlene Epp, a descendant of Claas Epp Jr., presented a Myrtle wood bowl from Oregon to the imam as thanks for the hospitality the people of Serabulak showed her ancestors 127 years ago.